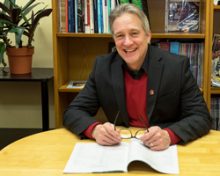 Dr. Barrie P. Bode graduated in 1991 from Dr. Mike Kilberg’s lab where his research focused on the mechanism by which amino acids rapidly activate the major glutamine transport system in the liver. After doing a two-year postdoc at Monsanto in St. Louis in the Liver Labs, he went to Massachusetts General Hospital in Boston where he set up and ran the Surgical Oncology Research Labs for six years as a junior faculty member, and ascended to Assistant Professor in the Harvard Medical School system. In 1999, Dr. Bode moved to Saint Louis University where he spent ten years as an Associate, then full Professor in the Department of Biology, and was a member of the SLU Liver Center and Cancer Center. His lab at MGH and SLU was funded by the National Cancer Institute where they focused on the role of glutamine transporters in hepatocellular carcinoma.  In 2008, Dr. Bode was recruited to Northern Illinois University’s Department of Biological Sciences as department chair, and is currently serving in his tenth year in the position. His lab’s research focuses on the role of amino acid transporters in tumor growth, and their viability as targeted cancer therapies. Along the way, he has trained seven PhD students, several MS students and dozens of undergraduate students.  For the last several years, most of his time has been spent on program administration in a large academic department, but research is still his passion. Dr. Bode states, “I don’t know too many people whose escalating paperwork gets them out of bed in the morning, and I’m certainly not one of them, but every week I look forward to ‘Research Fridays’ where my lab gets together for lab meetings and planning for the next experiments.”

(left to right) Dr. Bode, Dr. Kilberg and his wife, Pat, and Dr. Neil Shay at Experimental Biology in 2017.

Dr. Bode confirms that his training in the Kilberg lab and in the BMB program proved to be invaluable once he graduated from UF, as most of the positions he has held “left me to my own devices”, and his success (or failure) hinged on what skills he was able to carry with him.  In summary, Dr. Bode stated that UF’s BMB program provided a solid foundation for all his subsequent endeavors, and any success that came his way can be traced back to his training here at UF. He describes his mentor, Dr. Michael Kilberg, as a “tough but caring and excellent mentor”, and Dr. Bode always thanks his mentor for that whenever he sees him.  Recently, Dr. Bode and his lab had the pleasure of having lunch with Dr. Kilberg and his wife at Experimental Biology in 2017 – and reminisced about the “old days” along with one of his lab mates, Neil Shay.  Dr. Bode describes that while in the BMB program at UF, he also forged  numerous lifelong friendships and still keeps in touch with many of them.

“All around, the BMB program and my time in Gainesville was a wonderful and transformative experience.” – Barrie P. Bode, Alumni 1991

Dr. Bode and his lab members at Northern Illinois University.

In Honor of Dr. Mavis Agbandje-McKenna